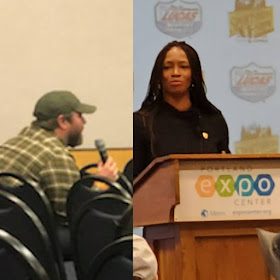 I had the opportunity this weekend at the Portland Sportsman's show to question our USFWS director Aurelia Skipwith on the current administration's deregulation of clean water protections that ensure healthy ecosystems for our fish. She simply responded that "the USFWS makes the best decisions they can based on science." What science says dumping mining waste into rivers isn't good for fish? That question I never got the chance to ask, but whether it's waste from coal mining in the Appalachian Mountains threatening trout streams or paving the way for a pebble mine in Bristol Bay, Alaska, these issues need our attention, and the attention of the US Fish and Wildlife Service.

Oddly enough, it was the next day that the Trump administration proposed to eliminate nearly all funding for the Land and Water Conservation Fund (LWCF) in its Fiscal Year 2021 budget. The President’s proposal to wipe out funding for LWCF, repeated from his prior year budget requests flies in the face of extremely popular bipartisan legislation in the House and Senate that would provide full
dedicated funding for the program.

The Land and Water Conservation Fund is America’s most important conservation program, responsible
for protecting parks, wildlife refuges and recreation areas at the federal, state and local level. For 50
years, it has provided critical funding for land and water conservation projects, recreational construction and activities and the continued historic preservation of our nation’s iconic landmarks from coast-to-coast.

LWCF does not use any taxpayer dollars – it is funded using a small portion of revenues from offshore oil and gas royalty payments. Outdoor recreation, conservation and historic preservation activities
contribute more than $887 billion annually to the U.S. economy, supporting 7.6 million jobs.

The LWCF Coalition is the umbrella group of more than 1,000 state and local land owners, small
businesses, ranchers, sportsmen, veterans, outdoor recreationists and conservation organizations
working to protect America’s public lands and safeguard our shared outdoor heritage for future
generations. The Coalition is united in its advocacy for the reauthorization and full funding of the Land and Water
Conservation Fund, which will ensure the continued conservation of our national parks, forests, wildlife refuges, wilderness, civil war battlefields, as well as state and local parks.

For more information on LWCF and the places in each state that have been protected using LWCF funds, visit www.lcfwcoalition.org

Let director  Skipwith know what you think about conservation of our salmon, steelhead and trout streams that need clean water.
Randall Bonner at 12:12 AM
Share